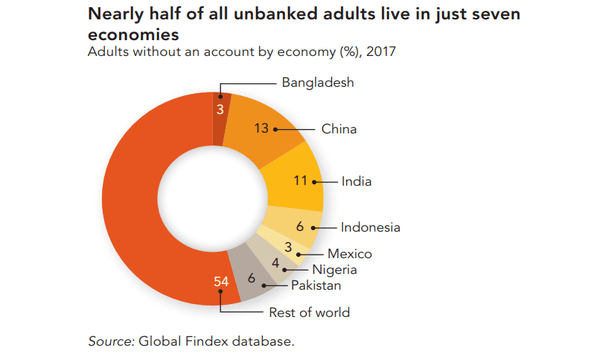 Chart of the Week: Check out which countries have the largest unbanked populations

Due to its sheer population size, China accounts for 13% of adults with no bank accounts which translates to around 225 million adults in 2017, a report from the World Bank revealed.

India follows closely at 11% which translates to 190 million although it has made some progress after adding around 300 million residents into the formal banking sector following government reforms in 2014.

Indonesia, which shares third place with Pakistan, accounts for 6% of the unbanked worth 95 million adults. However, this represents a marked improvement for the Southeast Asian country as the percentage of adults with a bank account surged from 20% to 49% in 2017.

The global average of adults with a bank account clocks in at 69% of the population. Developed regional economies like Singapore (98%), Japan (98%), Korea (95%) and Hong Kong (95%) consistently posted high numbers whilst developing economies like the Philippines (34%), Myanmar (26%) Vietnam (31%) may need more work to catch up to their regional peers.