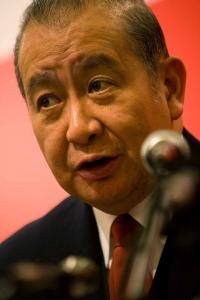 Bank of East Asia head honcho and chairman of the Chinese Banking Association, David Li, has been forced into eating a cold serving of humble pie after his seemingly untouchable bank suffered its first loss in 40 years. “BEA hasn’t posted a loss since at least the 1960’s,” said the bank’s spokesperson, Vera Lung. So why did it take the bank four decades to post a loss? The bank made a loss after writing down the value of credit-market investments, according to Bloomberg. For the six months ending 31st December BEA was hit with a USD110 million deficit just months after the bank’s shares fell 61 percent, according to Bloomberg. The bank’s results may come as a shock to some but not to Core-Pacific Yamaichi analyst, Lee Yuk-kei who wasn’t at all surprised by BEA’s poor performances due to the bank’s questionable handling of its expenses. “BEA has never been good at controlling expenses,” said Lee. So what can Li do to remedy the ills of his ailing bank? Rumours are aflutter that Li, a current member of the Hong Kong Legislative Council, is planning to cut costs by forcing his workers to take one day of unpaid leave per month, according to Bloomberg. So will Li’s plans help to restore BEA to its former glory? Times are grim and Li knows it. “The effects will be felt by the bank well into 2009,” said Li. And there’s no love for next year’s results either it seems with Morgan Stanley analyst Anil Agarwal expecting BEA “to have almost zero profits in 2009.”