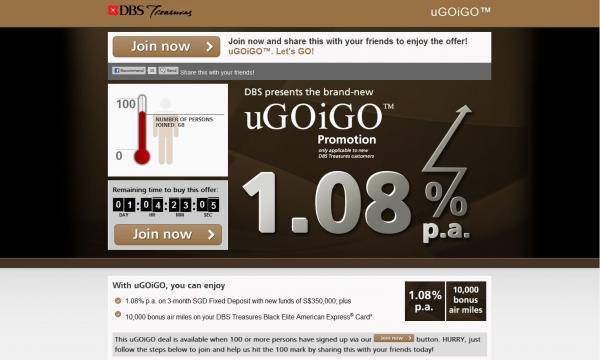 Guess how much interest a three-month fixed deposit of SGD$350,000 had?

DBS Bank recently revealed that it has successfully completed a first of its kind social media group buy campaign in Singapore’s banking industry.

Similar to an online group buy deal, the campaign allowed new DBS Treasures customers the chance to enjoy attractive fixed deposit savings rates when they shared the offer with their peers via social media. The offer was triggered once it received the required number of interested customers.

The innovative campaign is called uGOiGOTM and is part of the bank’s efforts to further engage its customers in the social media space. The initial deal was launched on 18 March 2013 (Monday) and offered new DBS Treasures customers the opportunity to enjoy interest of 1.08% per annum with a three-month fixed deposit of SGD$350,000. Within five days, it reached the 100% target as customers shared the deal with their peers online.

When the offer was triggered, customers received an e-coupon on their mobile phones and could open their accounts at any DBS Treasures Centre. Besides the attractive fixed deposit savings rates, customers were also awarded 10,000 bonus miles on their DBS Treasures Black Elite American Express Card.

In Hong Kong, we’ve launched the second wave of this campaign on the back of a successful pilot launch in February this year. We will also be launching this campaign in other markets like China, India, Indonesia and Taiwan in the coming weeks,” said Koh Kar Siong, Managing Director & Regional Head, DBS Treasures & Treasures Private Client, DBS Bank.

Since 2010, DBS has been connecting with its customers on social media and was the first Asian bank in Singapore to adopt a regional corporate Facebook page, www.facebook.com/dbs.

It launched the DBS Places campaign in 2010, awarding participants with points for every first check-in to locations in five Asian cities using supported mobile devices.

Other than earning points on checking in, participants were also similarly rewarded when they referred a friend successfully or had friends in their network who registered and participated in DBS Places.

Participants were also rewarded with points when they checked in to exclusive merchant deals that brought them new Asia dining and lifestyle experiences.

In 2010, the bank also launched the first I-Designed-A-Bank branch contest on social media which gave young people a voice in creating their preferred branch banking experience.

The contest resulted in over 80 design submissions and DBS partnered with the winners of the competition to bring DBS Remix to life. DBS Remix has two branches currently, which are located at *SCAPE and National University of Singapore. 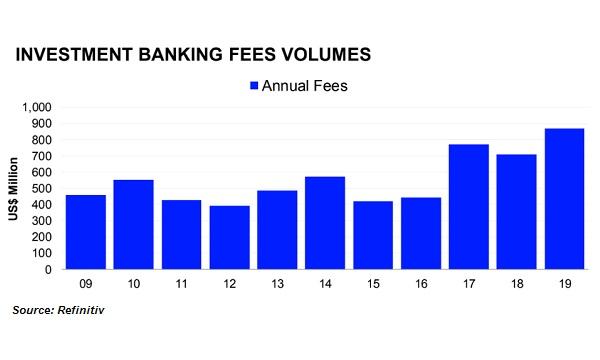