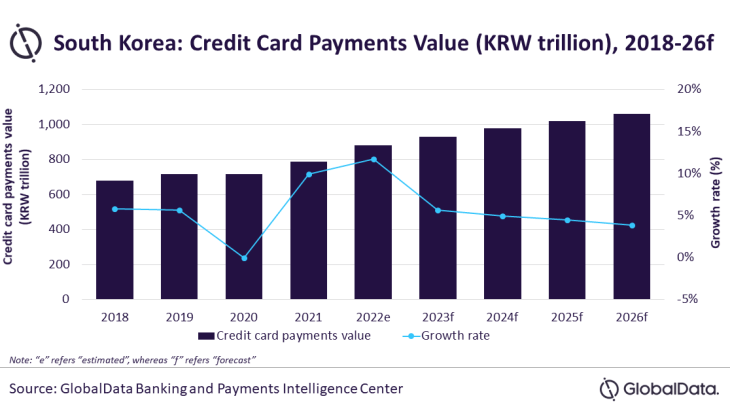 In the near term, rising interest rates may discourage card use.

South Korea’s credit card payments market is expected to reach $890.0b (KRW1,060t) in 2026, growing at a compound annual growth rate of 4.8%, according to a report by data and analytics firm GlobalData.

The market is expected to register a 9.9% growth in 2021, supported by economic recovery and government initiatives to boost consumer spending.

Credit cards are the most preferred payment choice in South Korea, accounting for nearly 80% of total card payments by value in 2022, said Kartik Challa, Senior Banking and Payments Analyst at GlobalData.

“Koreans are prolific users of credit cards with the frequency of payments by credit cards at 137.5 times in 2022, which is much higher than that noted in developed markets such as France, Canada, the US and the UK, where the frequency of use is 128.1, 83.6, 68.8, and 54.9, respectively,” Challa wrote.

However, although treading a recovery path, the Korean credit card market still faces a number of challenges such as global geopolitical risks and inflation, GlobalData warned. South Korea’s central bank recently increased its interest rate from 2.25% to 2.5% in August 2022, and then to 3% in October 2022. Rising interest rates will increase borrowing costs on credit cards, which is expected to discourage credit card spending, the analytics firm said.

“The reopening of businesses, rising employment, and government initiatives have all increased consumer spending in South Korea, thereby benefiting its credit card market. A revival in travel will further boost the credit card usage in the country. However, heightened global economic uncertainty and rising inflation could slow down growth in the near-term, dampening consumer confidence,” Challa concluded.