Agent Banking is getting more popular in the rural areas of Bangladesh. More number of agents and outlets are seen these days as their numbers have grown by 15.69% and 12.59% respectively in September 2020 compared to September 2019 even amid COVID-19, according to data from the country’s central bank, Bank Bangladesh (BB)

Bangladesh Bank issued prudential guidelines in which the statement policy describes the purpose of agent banking and defines, “Agent banking is a system of providing limited scale banking services to the underserved population through engaged agents under a valid agency agreement, rather than a teller/cashier.”

The prudential guidelines aim to facilitate the central bank's efforts to promote this advanced financial channel to bring a particular range of banking services and products to the society's underserved and unbanked population along with the existing banked segment, especially those located in geographically distant areas. In 2013,  initial guideline was issued by Bangladesh Bank to serve underprivileged or underserved section of population that was not included within any traditional banking network, agent banking is now a regular part of operations of 24 banks which have 10,163 agents and 14,016 outlets. Those banks are now employing agents whose jobs include providing customers with banking services like loans, remittances, savings, and payment services like utility bills, government transfer payments, taxes, etc.

According to BB's latest data, 8,221,893 cumulative accounts have been created through the agent banking system including 7,111,887 accounts by the rural population and 3,749,087 accounts by female customers. This persistent growth amidst the pandemic, which is by far a positive sign, indicates that agent banking services are experiencing a surge in popularity with people from different segments. 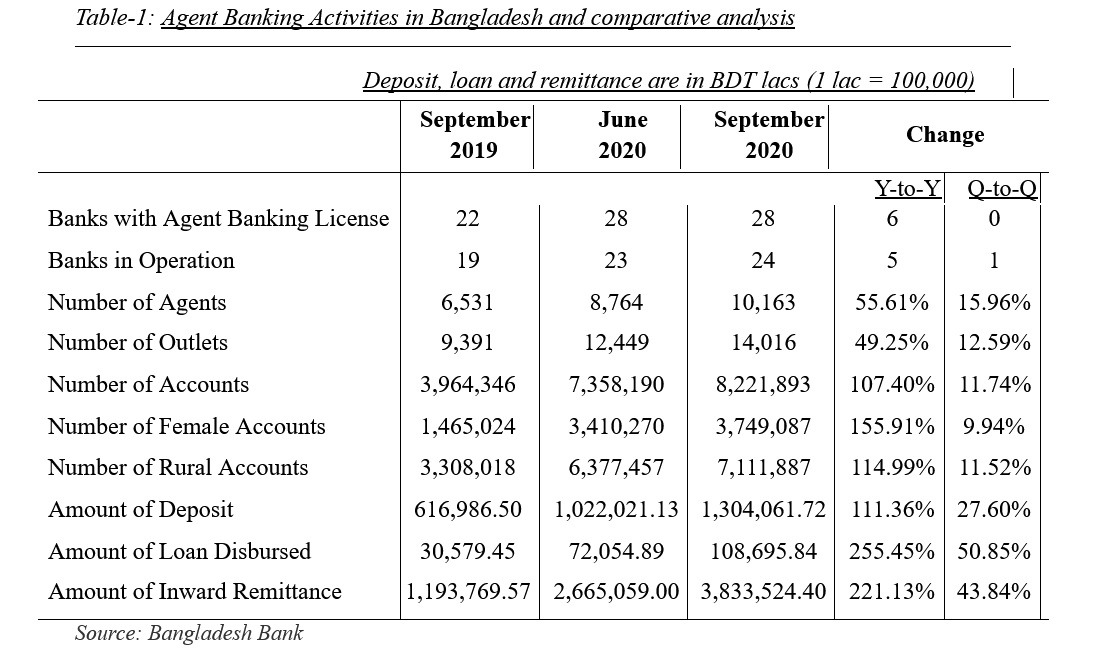 The top five of all banks in Bangladesh (i.e. Dutch Bangla Bank, Bank Asia, Islami Bank Bangladesh, The City Bank and NRB Commercial Bank) that have embarked on this banking method have claimed 98.96%of all agent banking accounts opened as of September 2020. With 3,243,675 accounts (39.45% of all accounts), Bank Asia stands on top of the list. There has been also a remarkable increase in banks' deposit collections and loan disbursements which stood at BDT 13,040.61 crore and BDT 1,086.95 crore respectively. Agent banks have distributed around BDT 38,335.24 crore in remittances. Rural areas are the major contributors to the deposits constituting around 77% which indicates a 3% increase from the previous quarter. This substantial deposit can create a great investment opportunity for the rural areas and for the development and stimulation of the local economy. 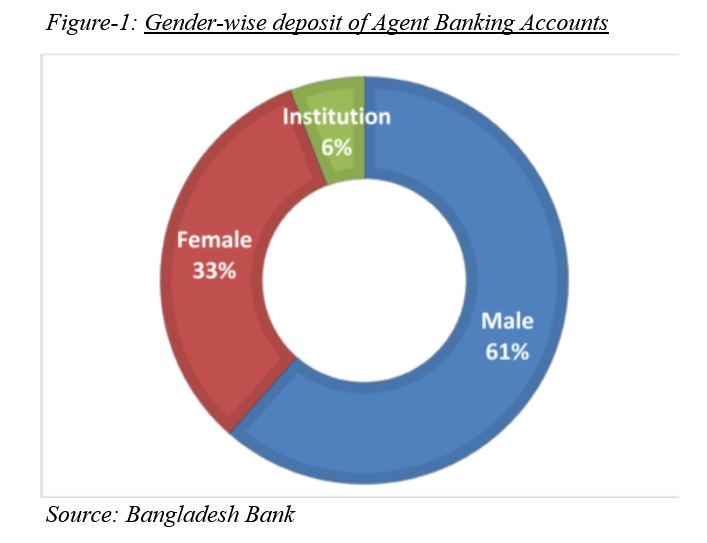 Recent studies reveal that agent banking is gaining traction among beneficiaries who see this channel as a fast way to get inward remittances at their doorsteps. During the quarter of July-September-2020 alone, the distribution of inward remittance through agent outlets has significantly increased by 43.84%.

Both the government and some enthusiastic banks took an initiative of offering expatriates 2% and 1% more cash incentive respectively on inward remittances through agent banking. This increasing flow of inward remittances is one of the positive outcomes of those initiatives. Till September 2020, 98.96% of the loan has been disbursed through the agent banking system by the top mentioned five banks which have also opened 82.04% of all agent banking outlets across the country with Dutch-Bangla Bank topping the list having opened 4,234 agent outlets to constitute 30.21% of all outlets. 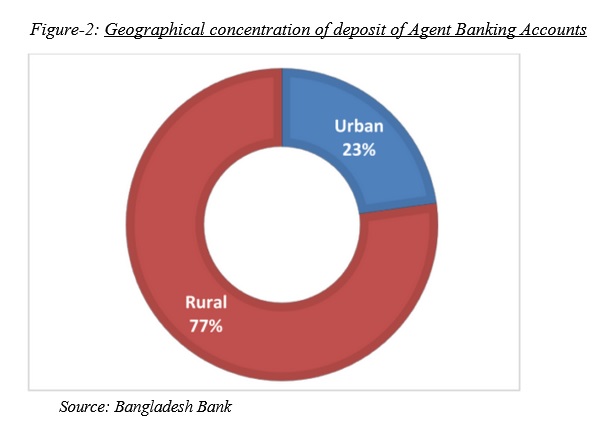 Those five banks have the highest number of accounts opened which make 90.74% of all agent banking accounts. Of the total loan that has been disbursed by banks through agent banking, 65% or BDT 701.88 crore went to rural customers till September 2020. These figures are indicative of a positive alignment between what has been achieved so far and the primary objective of agent banking – creating opportunities for rural people by bringing banking services to them and boosting the economy in their areas.

It is very much possible for rural people to open bank accounts using a nominal amount. Even, they can deposit small amounts and expect loans. Agent banking units have been facilitating the reach of foreign remittances to the doorsteps of rural people who are unbanked and located in different remote areas.

In this era of globalization, banks across the world keep adopting modern technologies to make their processes faster, more efficient, and convenient, and explore ways to expand their operational areas every day. Over the past few years, most banks have taken measures to diversify their products and services and create new subsidiaries which are allowed to provide new services to customers or merge with various other types of institutions in the industry. The consistently rising trend that agent banking is experiencing amid the global pandemic makes it a great opportunity for banks to bring a huge unbanked, rural population under formal banking processes and services.

Agent banking continues to play an instrumental role in making the essential financial services available to small business owners, beneficiaries of foreign remittances, common rural women, and entrepreneurs. Despite the growing percentage (9.94%) of agent banking accounts opened by women reported during the quarter, they have received only 10% of the total loan disbursed. With the vision to promote women entrepreneurship and create a large number of employment opportunities in the rural areas, Bangladesh Bank has been encouraging commercial banks to employ agent banking to introduce and expand the scope of disbursing women entrepreneurship loan and lending to micro and cottage industries, small and medium enterprises (CMSMEs). 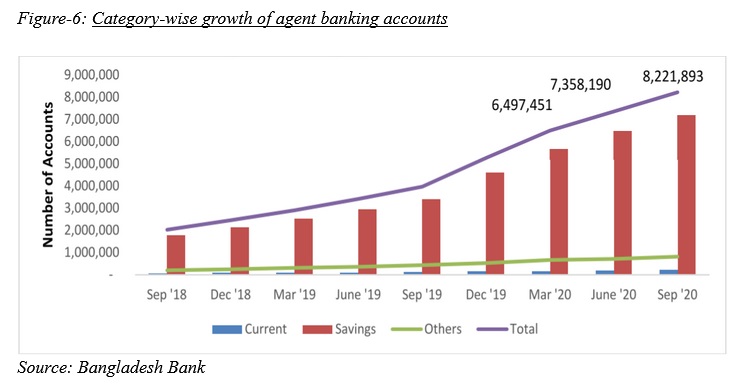 Agent banking has the potential to impact the country's overall financial inclusion process and narrow down whatever gap has been created by insufficient coverage provided by branch banking. Being more varied and impactful than normal banking which only includes the deposit and withdrawal of cash and remittances, agent banking has emerged as an innovative financial channel to strengthen the country's rural economy and make it sustainable.