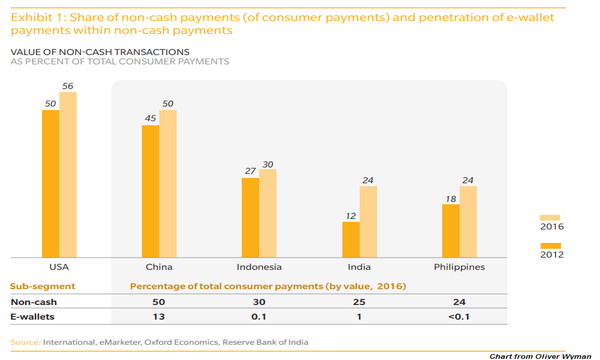 Chart of the Week: Check out mobile wallet adoption across Asia

A growing number of e-wallet operators are setting their sights to serve Southeast Asia's massive consumer market, driving expectations that mobile payments in the ASEAN will hit $30b by 2021, according to management consultancy firm Oliver Wyman.

Home to nearly 600 million digital-savvy consumers, the region has become a battleground for a mobile wallets battle as e-wallets have been launched in the region by a wide array of players from telco providers, banks, merchants, device manufactures, remittance players, and transport providers.

China's WeChat and Alipay are prominent players, driving the value of non-cash transactions in the country to 50% in 2016. Indonesia is also a prime contender with non-cash transactions rising from 27% to 30% in the four year period between 2012 to 2016 with ride-hailing giant Go-Jek rolling out its own digital payments to pay for taxi rides, food delivery and offline retail payments.

The Philippines is also on prime for a digital payments revolution as non-cash payment methods – particularly e-wallets – are expected to surge to 6% of total payments by 2022.

However, e-wallet operatrs need to stay constantly up their game and go beyond what their normal domain of payments to ensure their sustainability, according to Oliver Wyman.

"The challenge for participants in this space is to become useful enough in daily life that customers adopt their e-Wallets, use them regularly, and therefore retain funds in them. As the underbanked increasingly use new consumer platforms, they will come to expect more than basic e-payment capabilities."