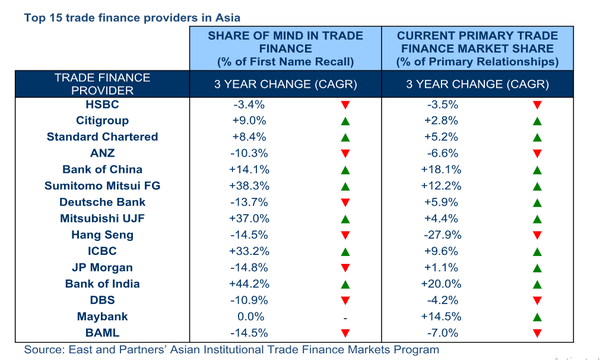 Banks are capitalising on the Asia's growing trade finance market with local lenders challenging the market dominance of incumbents like HSBC, ANZ, and DBS, according to banking market research firm East & Partners.

Lenders in the region have processed over $9t in trade finance transactions in 2017 alone, according to the International Chamber of Commerce, as Asia steadily positions itself at the heart of the world's trade corridors and major supply chains.

Bank of India emerged as the fastest growing trade finance provider with a compound annual growth rate of 44.2% over the past three years, surpassing Japan's mega-banks Sumitomo Mitsui FG (38.3%) and Mitsubishi UFJ (37%).

East & Partners's research relies on what has become an increasingly important metric in determining the market dominance of trade finance banks: mind share. Mind share is defined as the extent to which an incumbent service provider has embedded itself within its existing and potential customer base.

"Not only is earning a high degree of mind share critical to initial stages of customer acquisition, but it is also a key predictor of customer retention. Presence in the customer’s mind is a vital pre-requisite for a brand to be considered for a purchase," the firm said in a statement.

In fact, there is strong evidence to suggest a correlation between a provider’s mind share to its performance in trade finance market share gains or losses, according to East & Partners as the declining market shares of HSBC, ANZ, and DBS can be argued to be linked to their diminishing mind shares.

Although the same cannot be said for foreign heavyweights Deutsche and JP Morgan whose mind shares have declined 13.7% and 14.% but posted modest market share growth, indicating that banks are compensating for lack of mind share improvement with pricier relationship management practices.

"In the current environment where corporates split their core banking relationship further and customer churn remains significant in the business banking relationship, the role of mind share in cultivating long term brand loyalty is more crucial than ever," East & Partners concluded. "Trade finance providers need to identify the key mind share drivers and use those as guides when crafting their value proposition."